Facts About HTML5 & Flash Usage in the Real World

HTML5 concept was originally raised by WHATWG in 2004 and then accepted by W3C in 2007. Finally, the firstly official draft was published in 2008. We have already known that HTML5 intends to commit itself to be the substitute of Flash and Sliverlight, promising to bring richer but simpler interactive activity for web.

And there is a truth widely acknowledged that it should take time of applying any concept on paper to its real practice. Now time rolls into 2011, three years after HTML5 established its first outline public, how does this newly emerged technique be deployed in the real world around? Does it actually replace the previous method we used to adopt completely? When comparing coverage difference between Flash and HTML5, I believe we should check out two aspects separately. So I have collected some statistics through web and hope they may help enlighten you a little further on this point.

Flash is an established platform which reaches to nearly 99% of desktop and laptop, and 99% of browsers support Flash as long as Flash ActiveX control has been installed properly. According to some statistics at Periscopic, the Flash source may reach to 2+ billion potential audiences all around world successfully, according to some researches. As for HTML5, approximately 40% of browsers support HTML5 at present, which may reach to 800+ million audiences.

Generally speaking, on PC or Mac platform, Flash still occupy a dominative position compared with HTML5 at present. But with more popularity of iPhone and iPad from Apple, PC platform will not be the only option for surfing the net, many a people may choose mobile platform to view web site. And if it is in this case, Flash may lose its first rank position since iOS default browser Safari does not support displaying Flash at all.

It is obvious that video is a very popular on web site, and we can easily list lots of video sharing sites in minute. So when we are about to make a new site project, video format and codec should be a crucial factor to be taken into consideration! Now let’s see diagrams from Encoding about the video format trend in use. 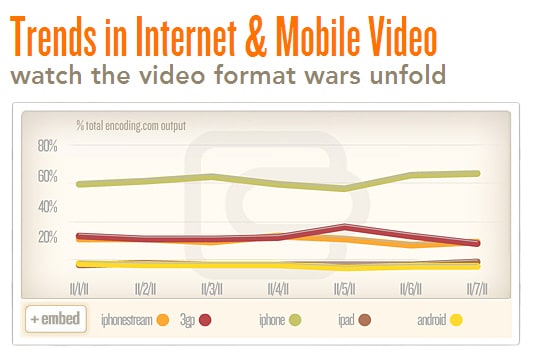 Last year, Steve Jobs had explained that Apple products like the iPhone and iPad don’t support Flash because although 75 percent of video on the Web is in Flash, “Almost all this video is also available in a more modern format, H.264, and viewable on iPhones, iPods and iPads.” This year, video search engine MeFeedia released some stats showing that 63 percent of the 30 million videos in its index are now HTML5-compatible. That number is up from 10 percent a year ago, 26 percent last May, and 54 percent in October, 2010. Now it’s clear understand that even though Flash video still occupy a relatively large portion in market, with H264 codec, HTML5 video’s share is still increasing fast.

Now you may want to ask how many sites have been developed in HTML5 now? Someone from binvisions has run a census that analyzes top 100 sites, as ranked by Alexa, for demonstration. The result as shown in the diagram below: 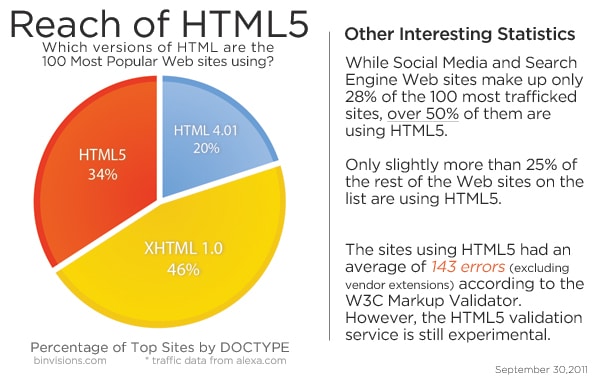 Now all mentioned above, we may easily conclude the advantages and disadvantages of deployment of these two tools and find out how many famous sites move to HTML5 currently. And I believe with more browsers will be HTML5 supported and more open video formats are available, HTML5 should become main stream of web site development in short time. Since Flash lets you reach the widest audience with the drawback of not working on some mobile devices, I suggest you analyze your target to determine which tool will be the better solution. If you intend to build site for PC users, no doubt, Flash should be the first option, and if you are going to make a project for mobiles, then I believe you should consider HTML5 at the first place. At last, I came across an online tool for converting Flash to HTML5 by accident recently, and I share it with you here, hoping that it may give more clues for your next project.