jQuery: Top 20 Animation Effects You Can Implement On Your Website

Animation is something that we all love, as it makes the object or element, it is applied to, appealing, and also act as an eye grabber. Earlier animation was restricted to only cartoons, but then it came into website development too, where web developers used to implement animations on websites using jQuery. However, as technology has progressed, animation can now be implemented with CSS3. But, here the catch is that not all browsers support CSS3 animation. And for that very reason, developers still need to use jQuery as a Fallback method. 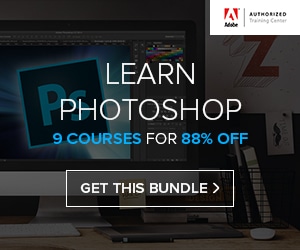 In addition to this, there are many animation related things that you can’t achieve entirely with CSS3 only. But with jQuery you can easily bring life into any web element easily. And in an attempt to make you aware of what jQuery is capable of, we have come up with an idea to list top 20 animation effects you can implement on your site using jQuery. The animation effects listed in this blog post are really fascinating and will definitely inspire you to give them a try. 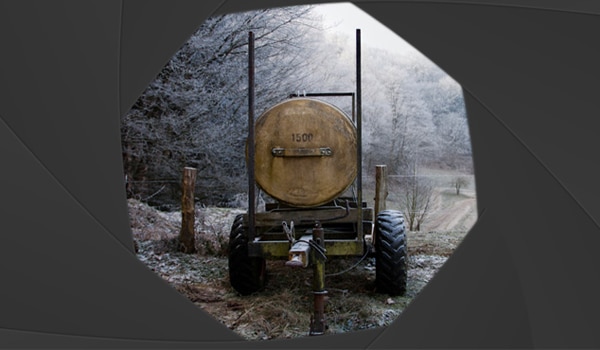 Have you ever tried your hands at Canvas, a new HTML5 element to draw graphics using JavaScript yet? Here, the developer has made a brilliant camera shutter effect that you too can use on your site to display your photographs. To make this effect, the developer has used HTML5 canvas tag, CSS3, and jQuery by creating custom events named as shutter Open and shutter Close, for which trigger(), the jQuery method has been used. Moreover, to ensure that the shutter effect runs smoothly, the image frames are generated ahead of time using a separate canvas element. 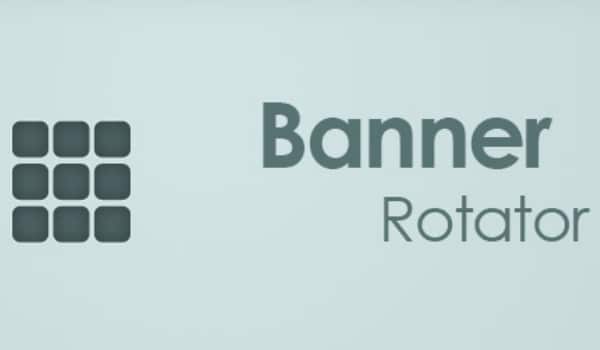 Have a website where you need to display banner advertisements to earn money? Though website CMSes like WordPress offers banner advertisement solutions via plugins, but they all aren’t much effective, as most of them only provide static banner placements. But in case, if you are interested in displaying rotating banner ads, then don’t worry as in this tutorial, the author has shared quite a simple way of making simple banner rotator with jQuery, that move the advertisement banners every time a new user visits the site or the existing user refreshes the webpage. In addition to jQuery, the author has also used PHP for programming and MySQL for database. 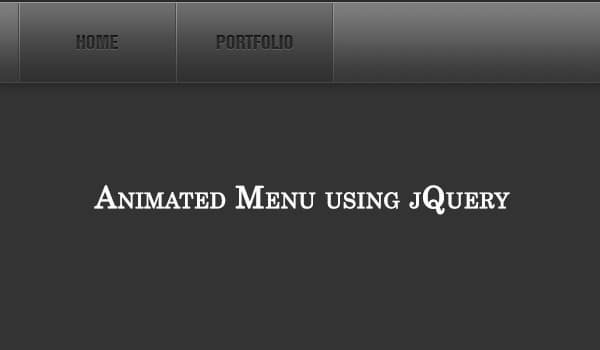 Creating menus is something that is very common for every web developer, as every webpage or a website has a navigation menu. However, not all websites have an animated menu, as developers generally use Flash to make an animated menu bar. But not anymore, as in this tutorial the author takes you through a process where he makes a graceful animated menu with jQuery. Additionally, he also uses image sprite for the menu bar and with jQuery handles the opacity pretty effectively.

Circulate any object with jQuery

Being a web developer, no matter if you are an expert or a beginner, had you ever came across a task where you need to circulate a webpage element? If yes, then were you able to accomplish it? Probably not, but don’t worry, as in this tutorial, Chris Coyier, globally known for www.css-tricks.com, tells you how to animate any web element into a circular motion. And here, he has accomplished his task using jQuery version 1.4+ with its .animate() function.

Creating menus seem pretty easy task for all sorts of web developers including experts, intermediate, and beginners. But have you ever wondered to create a menu with animated text and icons on it? Want to know how it is done? Just go through this perfect tutorial, where the author has created eight different types of animation effects on a simple menu using jQuery. The animation looks stunning and powerful that it inspires you immediately to use the same on your site. 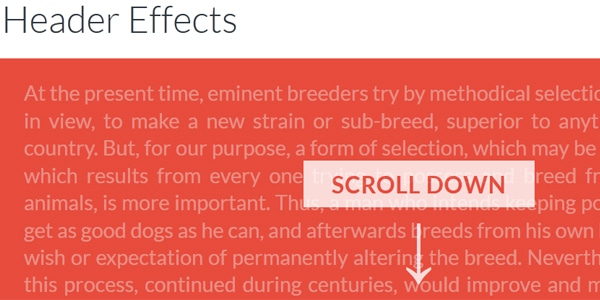 Since animation has been introduced in jQuery, then in CSS3, web developers are in love with the animation, as it really makes thing much more interesting and eye catching. Though, you might have also tried to animate many of the web elements, but did you ever try to play with the header? Probably no and never, but in this latest tutorial, the author has been able to catch the attention by making animated header using the powerful jQuery that animates the header whenever a user scrolls down to the website. 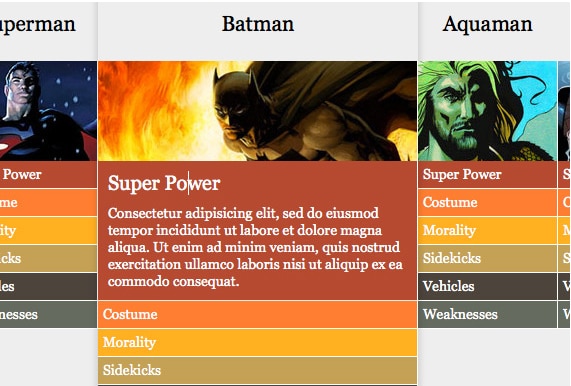 Have you ever faced a situation, where you need to display a lot of information on a webpage but only in a limited space? If not, then you may probably get a chance to come through these kinds of situations. But you should never worry about that, as to handle the space crunch, you can easily opt for an accordion, and that’s what the author teaches you with this jQuery tutorial. Here, you’ll be able to learn about making a grid accordion where only one cell opens up at a time with a reasonable reading width. 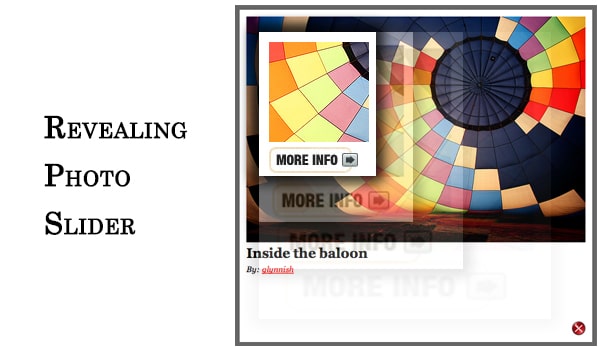 Did you ever try to make image thumbnails that expand using the much popular jQuery onClick event and displays the entire image along with its information? Probably, you may have done the same thing for an ecommerce store, but not by using the jQuery, instead you may have opted for the CSS using its hover effect. However, in this tutorial, the author has showcased another great technique to make a thumbnail based photo gallery, where a photo is revealed entirely by clicking a button. Once you’ll go through this tutorial, we are sure you’ll love it. 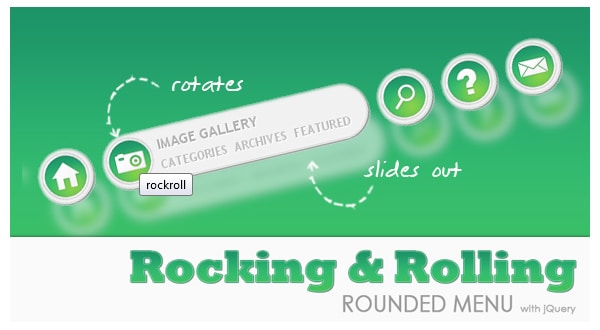 You might have heard about animated menu before, and not to forget, we too have discussed the same just a few points before. However, animation shouldn’t have any limitations; instead we all should try to cross the barriers and come up with something that can make people wonder ‘how did he do that?’, and that’s what the author of this tutorial has tried to do. Here, the author has made a rounded navigation menu and gave it a rolling animation using jQuery, which really looks like an innovative approach towards better web development. 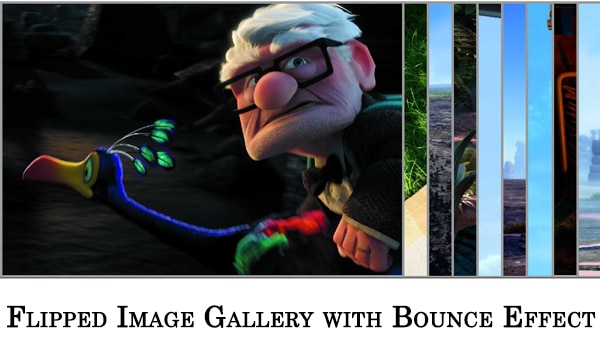 Image gallery is one of the most important aspects of a website. As that’s what we basically use to display our work or projects. But generally, we like to keep our image galleries as simple as possible. However, some people really like to play it cool by adding some kind of mouse hover effect or by bringing animation effect into play. And in this tutorial, the author has tried to make a unique image gallery and add a bouncy animation effect using jQuery, which really makes this tutorial quite interesting to go through. 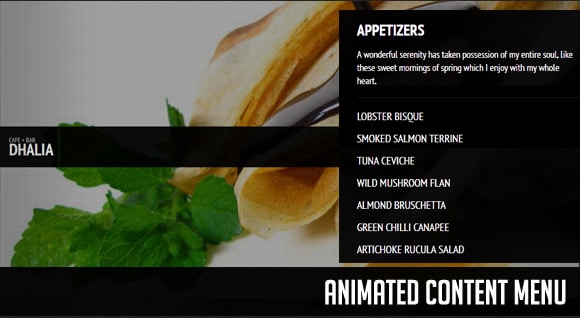 We all try to make something that is better and different from others, and also that looks inspiring for others. And in an attempt to accomplish something that is unique and inspiring, the author of this tutorial has made an animated menu bar that pops up the menu content. Additionally, the background image also gets changed whenever the different menu tab is clicked. All the animation part has been handled with jQuery. 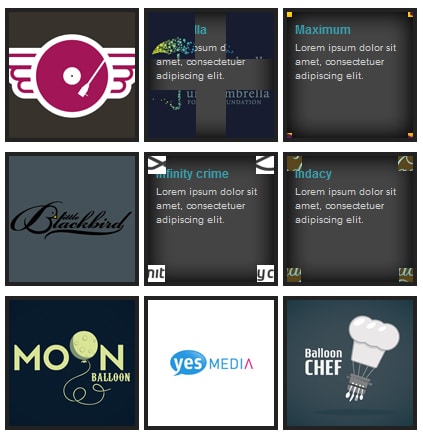 Innovation and improvisation is the key to success in such competitive days, where developers are always on their toes and ready to experiment this way or that way. In this tutorial, the author has used the same approach of innovation, as he takes you through a completely new sliding door effect for which he has used jQuery. Here, he showcases how you can also add a sliding door effect on your image galleries, and banner advertisements. The best part about this technique is that you can also learn to add HTML based content at the back of gallery images, which can be indexed by search engines. 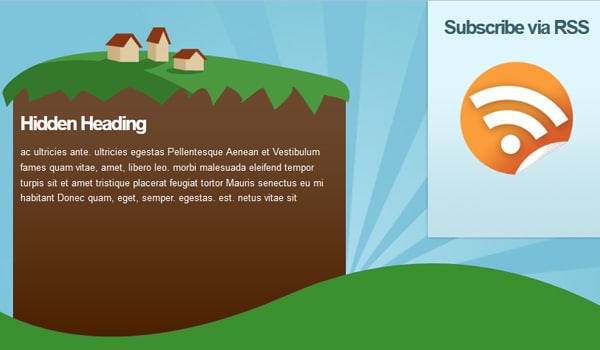 Did you ever think of adding animation to the header section? Here, in this tutorial the author teaches you how to make a header and add animation effect using jQuery. To accomplish this task, the author has also used some jQuery based plugins such as jQuery Easing plugin and jQuery Delay plugin. Once you see the demo of this tutorial, you’ll notice in the header area how from the left side, a particular web element rises to the top, and from the right hand side, how a Subscribe via RSS pops down from nowhere.

Did you ever come across a site where a form like a contact or query form shakes up if all the fields aren’t filled properly, or if incorrect username and passwords are entered? If yes, and you also want to use the same effect, then go through this tutorial, where the author reveals how a form shaking effect can be applied to show the users that the form data is incomplete or inaccurate.Here, he uses jQuery to shake a login box/form that shakes every time an invalid form is submitted. 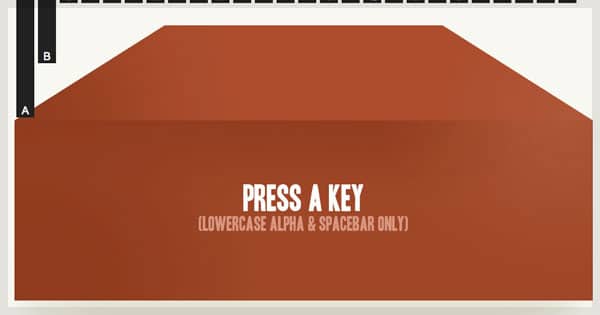 With jQuery in place, nothing is impossible, and that’s what the author of this tutorial has tried to prove us efficiently. Here, he has used the Keypress Events of jQuery to create a unique type of animation effect that comes into play whenever an alphabet key is pressed on a keyboard. To make sure that this animation works smoothly, the author has also utilized the jQuery Easing plugin. 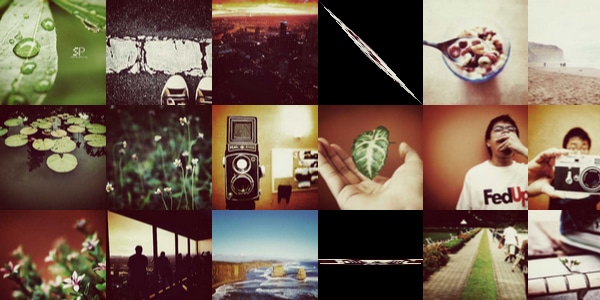 Image grids are in huge demand nowadays, and are generally request by photographers, who love to showcase their work using a variety of image grids. Moreover, the same kind of effect is also created by Facebook for their site, where you get to see a lot of images in small thumbnails. But the one that the author of this tutorial tries to teach and make with you is something different, as it’s fully responsive, and can be implemented in 5 different styles. All this is done by using  jQuery. 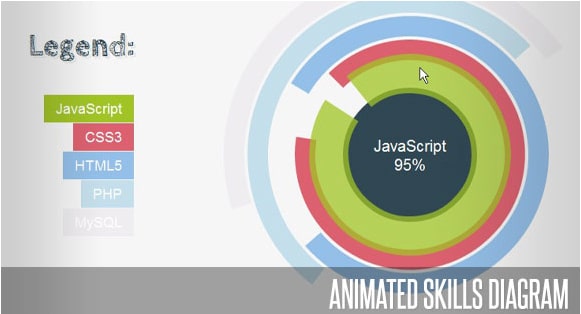 In order to present any information in stats, it is always better to make a diagram of it. However, to make a compelling diagram, you would require great software, right? But not anymore, as in this tutorial, the author tells you how to create an animated diagram representing skills in percentage. To make this animation effect possible and work smoothly, the author has used gRaphael, a jQuery based JavaScript library that is used to make fabulous charts. 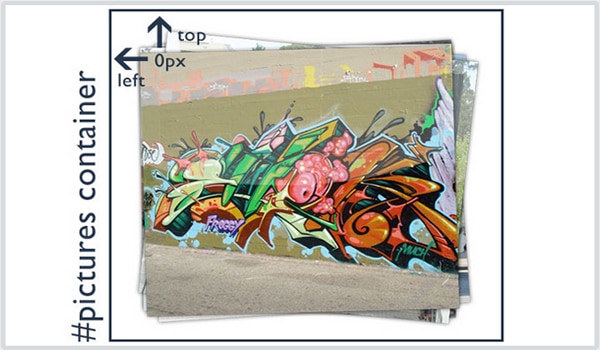 For many developers, using a z-index property in CSS seems more difficult than rafting in the ocean. However, it’s pretty simple to handle the z-index property. In this jQuery based tutorial, the author has created an animated image gallery, where he has used the z-index property, along with the super awesome jQuery to handle the animation effects quite easily. In the demo, the effect can be noticed by clicking on the ‘Previous Picture’ or ‘Next Picture’. 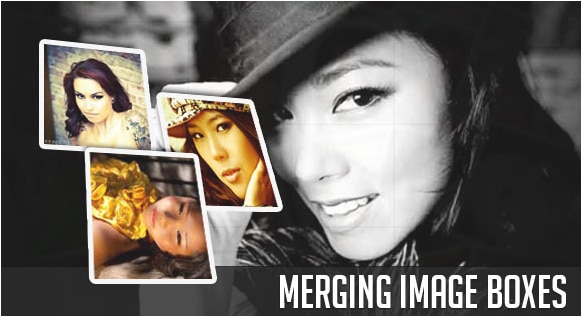 For web developers, jQuery is the key to animation, as it is light in weight, and helps to accomplish the task pretty easily and efficiently. And here in this tutorial, the author has showcased yet another technique of animating things quite easily. Here, an image is formed by animating a set of different thumbnails with a click. To make this effect possible, the author has also used a jQuery 2D Transform plugin.

If you have liked any of the top 20 jQuery based animation effects as well as their detailed tutorials that we have shared with you here, then please don’t forget to share the blog post in your social network. Moreover, you can also share your valuable feedback with us in the comment section provided below.