The past three years have seen smartphones become ubiquitous as web surfing mediums the world over. Statistics show that mobile devices now comprise a considerable portion of all web traffic. Therefore, in terms of web design, it’s no longer sufficient to create a website that performs and displays nicely on desktop machines alone, but rather it needs to be easily navigable and accessible on mobile devices as well. Users are usually finicky and don’t want to battle to access a site’s content comfortably.

In this post we’ll see how to achieve this with minimum effort and resources by using an online tool that automatically converts sites to mobile.
[m2leep]

Optimizing a Site for Mobile the Resource-Consuming Way

On the surface there are 2 ways to accomplish a site’s optimization for mobile. The first is by coding an alternate optimized-for-mobile site from scratch, which would be dynamically served to smartphone and/or tablet users (whether via subdomain <m>, <touch> or what have you).

The second way is by incorporating “responsive” features in a site’s design, which mainly involves sizing pages and elements fluidly, and using different stylesheets based on browser dimensions. I won’t go into either of those because they’re beyond my range of expertise and aren’t relevant to the topic at hand. What I will say though, is that both these techniques require web development expertise or, alternatively, a non-negligible amount of funds for hiring someone with this expertise for their proper execution.

If you’re a website owner, who, for whatever reason, isn’t interested in either of the above, you’re seemingly out of options and stuck with a desktop site alone. If you sell goods or present yourself to the world online this might not be an ideal situation for you.

There is a viable alternative for getting your site geared for mobile users though. By using an automatic desktop-to-mobile conversion tool such as GinWiz, optimization for mobile requiring minimal resources in both time and money is attainable.

What am I talking about?

Let’s use an example. Say I’m a Toulouse baker (http://www.boulangerie-saintgeorges.fr/), who a few years back hired someone, now long forgotten, to build a website for me. It sees a steady flow of quality traffic (a legitimately interested audience), yet a decent amount of it is now made up of smartphones and tablets users who experience the following on their devices: 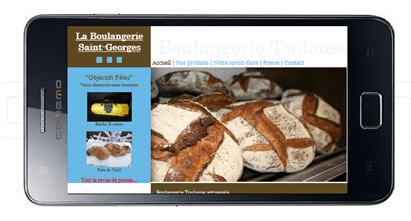 I’m not interested in presenting myself to them this way on their devices. Even if I’m not a designer, I realize that space isn’t being utilized as it should, and that site components are sized out of proportion. It’s by no means a disaster, but a layout like this requires a user to zoom in and out and then to scroll in different directions to get a look at what they’re interested in seeing.

Once I click through to the products section, the situation remains the same: 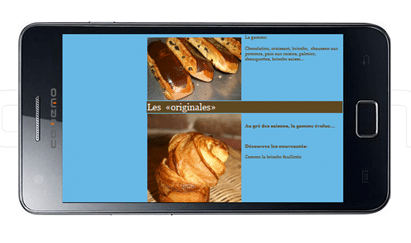 Again, I’m required to zoom in and out and to scroll horizontally and vertically to get a proper view of what I’m interested in.

And another example of a different section, just for good measure: 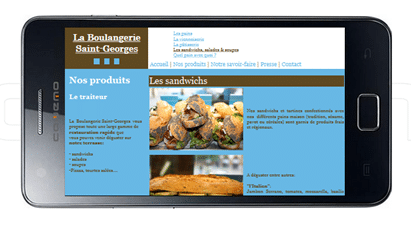 Pretty self-explanatory. We can all agree that most of the visitors seeing the above won’t appreciate twiddling with the site’s display to peruse items on the menu. So what does our Toulouse baker do to serve some appropriate HTML to his site’s hungry mobile visitors? As mentioned above, he can shell out a good few hundred US dollars (at least) on a web professional to recode his site, or in the more unlikely and impractical scenario, spend many hours learning the ins and outs of his site’s page structure and  do the coding himself. As our baker’s expertise lies in the realm of pastry creation and not web design, and as he, like any business owner, would prefer to keep his overhead low, neither of those options can be deemed ideal for him. Rather, his option of choice would be to make use of a tool like GinWiz.

How would that work? Simple. The baker heads on over and inputs his site’s URL into the rendering engine: 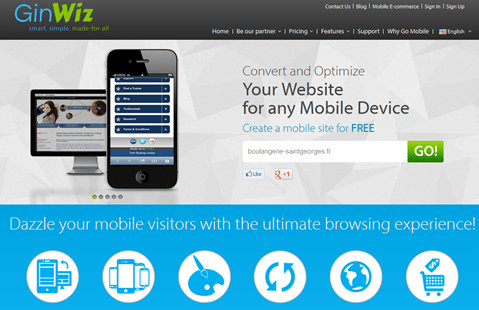 Presto! His site is now on good terms with mobile devices: 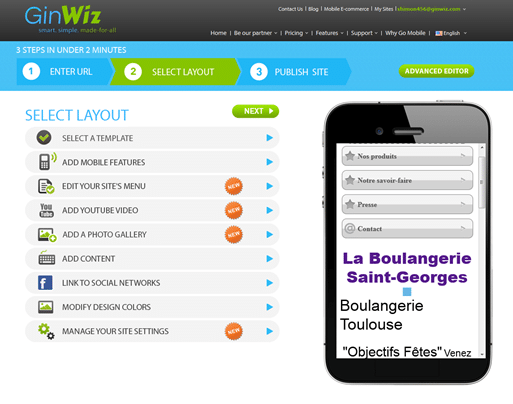 As is apparent from the screenshot above, before publishing a site, our baker can add all types of features to make his site more useful and/or entertaining to his users, whether it be adding click-to-call, click-to-email or click-to-directions buttons, embedding youtube videos and so on. Customized styling is also available to him in different ways, whether it be configuring fonts, colors, borders etc. He can always go back to editing his site once published, so he can leave tasks for later if necessary.

Once  done, it can be assumed that our baker would actually like the mobile version of his site to be accessible to visitors coming to it on their mobile devices. How does he do so? Simple. He inserts a line of code into the ‘head’ tag of his desktop site’s homepage and once done, mobile devices landing on his site are detected and redireted automatically to his mobile site: 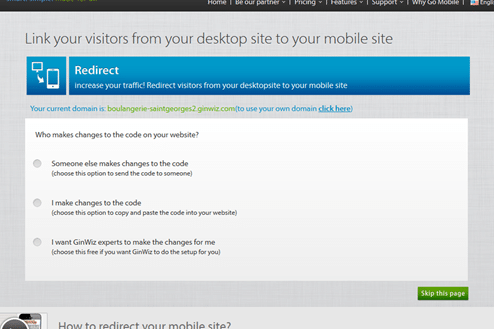 The finished product mobile device users should end up seeing is something like this:

Mobile web traffic has soared in the past three years. For website owners to properly cater to mobile visitors they must be able to serve optimized-for-mobile HTML. A cost effective and minimally time consuming way to do so, is by using an online desktop-to-mobile conversion tool such as GinWiz. With GinWiz, the process is automated and leeway for appearance and design customization is given. This way, publishers of any size can remain accessible to their audiences.