For most of us, leaflets are a part of our daily lives. They’re constantly falling out of newspapers, being handed to us in the street, and being mailed through to us, but most of the time, we don’t take much notice of them (or at least, we try not to take much notice).

There are a number of reasons for this: leaflets are often forced down our throats (e.g. via unsolicited mailings); they often advertise products/services that are of little interest to us; but perhaps most prevalent of all, they’re often quite poorly designed and simply don’t appeal.

Leaflets have a tendency to be cluttered and jam-packed full of information, which can often cause information overload and thus, an inclination to simply disregard the leaflet entirely.

Not all leaflets fall into this category though; designers are creating beautifully designed leaflets all the time, we just don’t see them as much as the poorly designed ones.

I thought I’d round up a few of the better-designed ones to help inspire you; here they are: 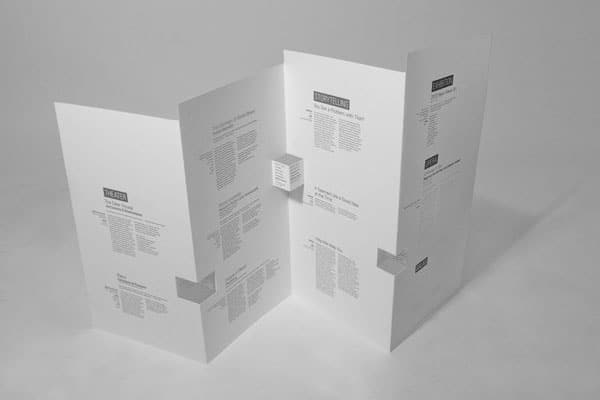 Ruth Tsang – a Baltimore-based graphic designer – created this beautiful leaflet on behalf of the Next Wave Festival, an event created by the Brooklyn Academy of Music.

It’s a great looking leaflet, despite its lack of colour. However, what really makes this leaflet stand out is it’s sculpture-like quality.

The designer has crafted the leaflet in such a way as to create small pop-ups in the leaflet. As it’s unfolded, these pop-ups create a cool effect (as you can see in the image above).

The pop-outs also have small pieces of information contained within them. 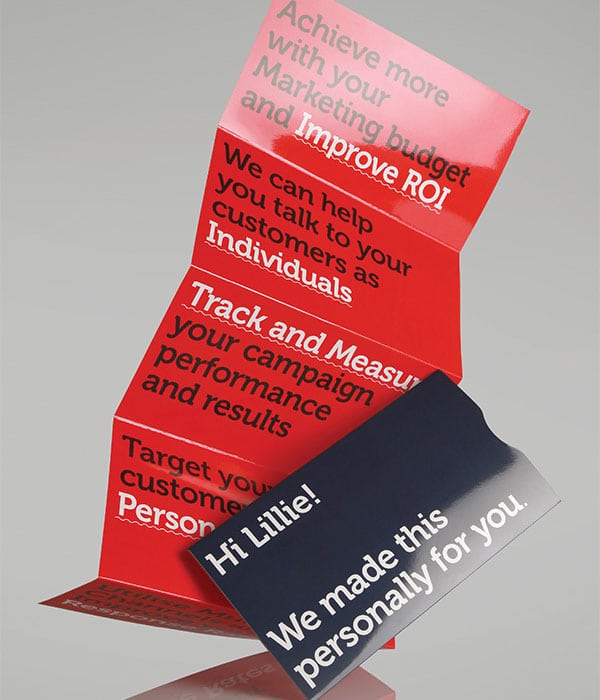 Hickling & Squires – a commercial and lithographic printing company based in the UK – approached design agency Un. Titled to create this leaflet, with the aim of marketing their new digital suite.

It’s a bold and eye-catching leaflet, thanks to the bright red background. It’s also quite a simplistic leaflet, as it contains no imagery whatsoever; instead, it features nothing but bold, contrasting text.

White text is used for the particularly important points, with a slightly less-contrasting black colour used for other information.

Un. Titled also crafted a personalised envelope for the leaflet, which is a nice touch. 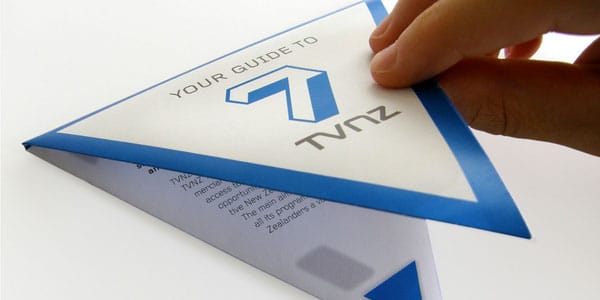 Much like flyers and other printed marketing materials, most leaflets tend to be a similar rectangular shape; but who says leaflets have to be this shape?

Thomas Pavitte created this stunning leaflet for TVNZ 7, which folds into a neat triangular shape. However, when unfolded, the shape of the leaflet matches the TVNZ 7 logo (i.e. a number seven shape).

The idea here was to create a leaflet that unfolds in the same manner as the organisations animated television idents, thus creating consistency across the brand’s marketing channels.

La Mamzelle & Co. created this leaflet on behalf of Molto Piano, an event that takes place in March.

It’s quite a chaotic design, but it’s certainly eye-catching. The idea behind the colour scheme (i.e. black and white) stems from the colours of piano keys. The shape of piano keys also influences the leaflet, hence the consistent use of large, rectangular blocks of black and white throughout the design.

As the leaflet is unfolded, it reveals large, high-quality photography and more information about the event. 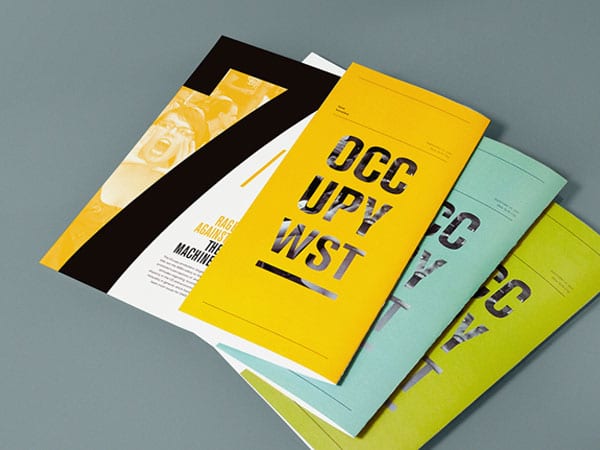 Occupy Wall Street – a movement for tacking wealth equality – was felt across the globe.

Stephane Pianacci created this leaflet with the idea of creating a historical document that would give people direction and knowledge regarding the movement.

As explained by Stephane herself, the black and white colour scheme was used “to symbolise the photojournalistic and historical content of the global movement”, while the yellow colour and bold typography were used to represent “the energetic feel” of the movement. 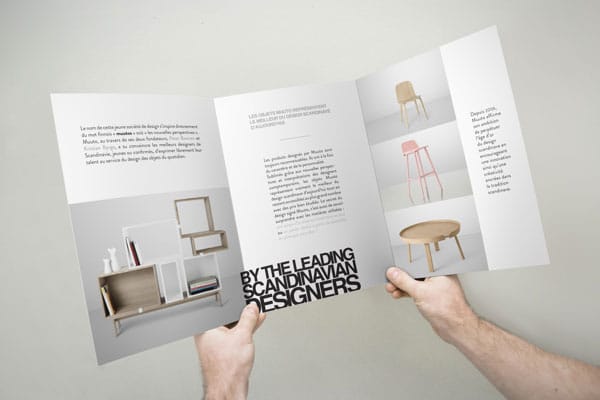 The most notable element of this leaflet is the use of beautiful typography. There are two typefaces used throughout the design, both of which compliment each other perfectly.

The use of white space helps to draw attention to the information contained within, as well as the beautiful images of the products created by Muuto. 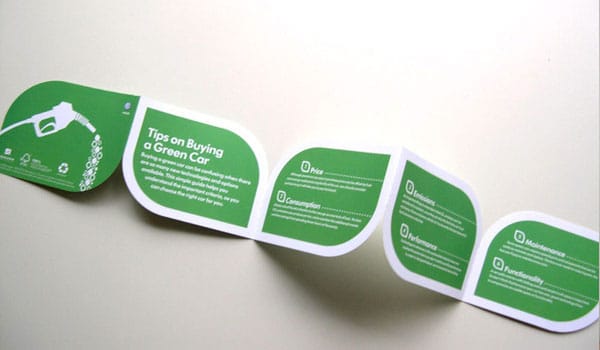 Again, this is a leaflet that strays from the standard rectangular shape of leaflets and instead, opts for a unique, curved design.

As the leaflet unfolds, it gives information about the engine itself, as well as the car being sold. As you’d expect, the leaflet makes use of green to symbolise the environmentally friendly nature of the engine.

I particularly like the front of the leaflet, which depicts a car creating grass skid marks. 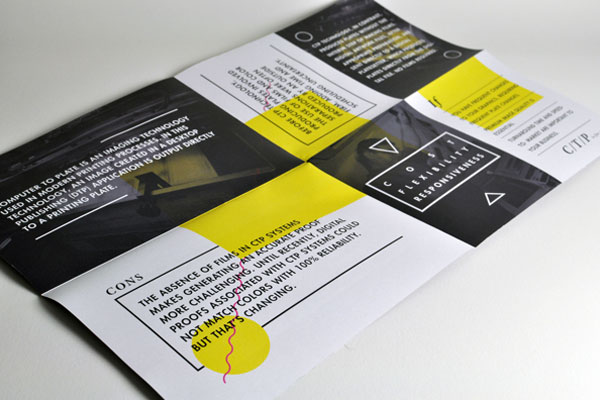 CTP commissioned Javier Fuentes, a Boston-based designer, to create this beautifully simple and modern leaflet, which aims to educate its audience on the Computer-to-plate printing technique.

It makes use of old, sans-serif typography (all of which is written in uppercase), which looks absolutely stunning and certainly appeals to its target audience of young art students.

On one side of the leaflet, there’s information relating to the printing technique itself, while on the other, the leaflet actually unfolds into a poster. 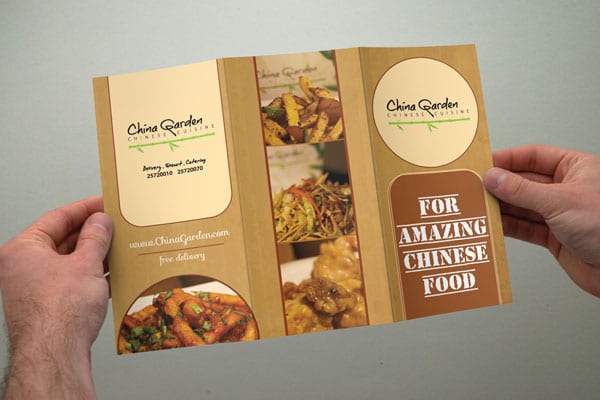 If you’ve ever received a Chinese takeaway menu through your letterbox (or picked one up at the restaurant itself), you’ll probably have noticed that design-wise, it likely wasn’t the most appealing.

Typically, takeaway leaflets are packed with information and make abundant use of low-quality stock photography. They’re also typically quite cluttered and unnecessarily complicated.

However, this menu from China Garden is far from the norm. It’s not so information-heavy, and it also makes use of beautiful photography.

It’s a breath of fresh air in the world of takeaway menu leaflets. 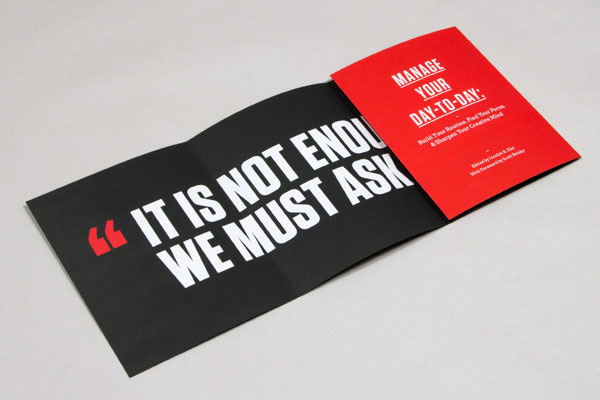 To promote the release of Manage Your Day-to-Day – a book created by 99U – a bunch of graphic designers clubbed together to make this absolutely stunning leaflet.

The idea behind the leaflet was to create something that served as a “succinct overview of the book, while also giving people something with lasting value”.

It’s a stunningly bold design, making use of bold red, black and white colours, along with large, bold typography.

It gives information about the book as it’s unfolded, but when fully unfolded, it also serves as a poster of motivational quotes (hence the “lasting value” part). 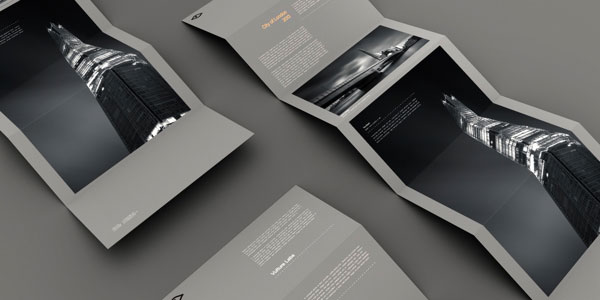 Jake Brandford – a London-based graphic designer – created this ridiculously minimalistic leaflet on behalf of the City of London in 2013.

It’s a beautifully crafted leaflet that makes exceptional use of colour to create a minimalistic yet eye-catching design. Clearly, it primarily uses the colours grey and white, but there’s also a bit of orange thrown in there for good measure, as it’s used to highlight important information (i.e. titles).

It also presents imagery in a beautiful and unique manner, spreading photos across multiple pages. 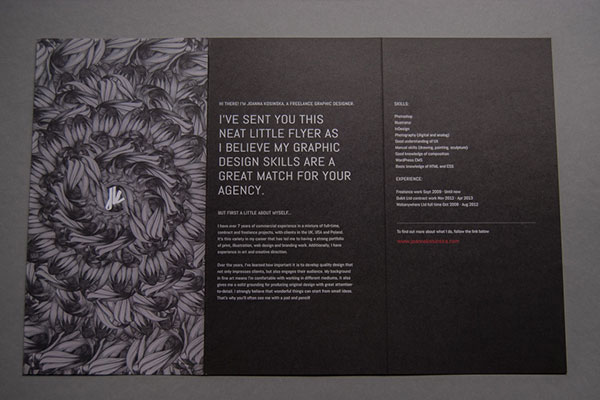 Joanna Kosinska – a Leeds-based graphic designer – crafted this insanely gorgeous leaflet to highlight a few of her favourite pieces of work from her portfolio.

It has an absolutely beautiful front-cover, which appears to feature a flower-like design with a small graphic of Joanna’s logo in the centre. It’s simple, yet beautiful and effective.

When unfolded, Joanna explains exactly why you’re reading the leaflet in plain English, she says, “I’ve sent you this neat little flyer as I believe my graphic design skills are a great match for your agency”. 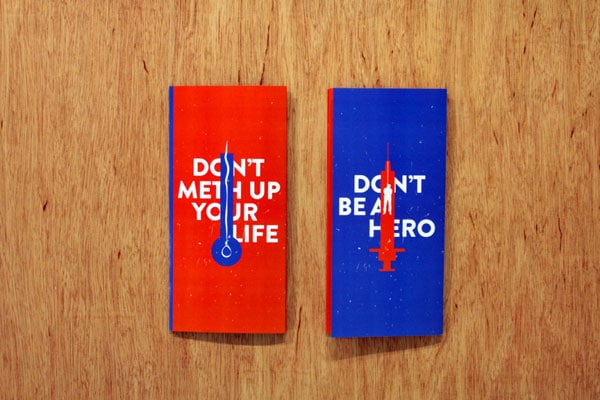 It’s no secret that Heroine and Methamphetamine can be extraordinarily damaging to your health, yet people around the world are still getting addicted to the drugs every day.

The aim of this leaflet was to highlight the bad side effects – as well as the penalties – for taking Heroine and/or Methamphetamine to an audience of youths.

To do this, the designers opted for a bright, bold colour scheme (red and blue), backed up by the strapline, “Don’t Meth Up Your Life”.

Inside the leaflet, it goes on to talk about fines, imprisonment, and negative health effects associated with the drugs. 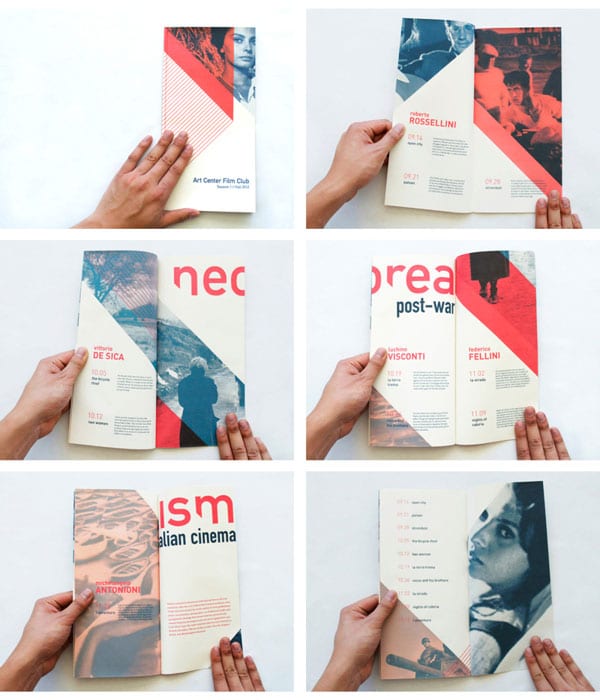 He explains that the goal was to “use type and imagery to convey the mood of post-war era cinema, while remaining fresh and current for a contemporary audience”. In our opinion, this leaflet fulfills that design brief beautifully.

He used bold sans-serif typography, along with beautiful photography and a red/blue colour scheme.

He also used stitch binding to add “vintage and a humanistic quality”. 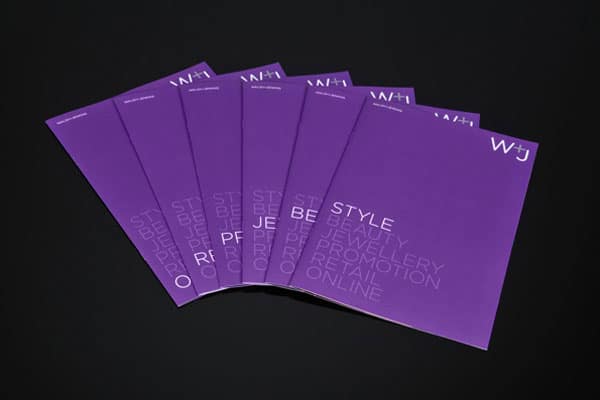 Walsh and Jenkins are yet another company who chose to commission the UK-based design agency, Un. Titled, to craft a stunning leaflet design for their brand.

The result is this stunning series of leaflets, each of which focuses on one aspect of the brand (e.g. style, beauty, etc.).

The design is consistent across each of the leaflets, with bright purple being used as the primary colour for the front cover. Inside, there’s a consistent use of beautiful typography along with a creative arrangement of imagery.