Typography is a fine art form. To the untrained eye, it seems like there are about 40 unique fonts with identical copies abound that make up the hundreds of fonts in existence. However, typographers are a keen type and there are small differentiating features that when combined, result in a finely-crafted and unique font. As commoners, we may not be able to pinpoint the specific differences between two fonts, but we can often sense that there’s a difference, even if it’s minute. We may even be drawn to one over another, and are not quite sure why.

One of the most common mix-ups is between Arial and Helvetica. Both sans serif fonts are designed from a Grotesk base. They are rather different otherwise.

Helvetica was originally created in 1957 by Max Miedinger and Eduard Hoffmann of the Haas type foundry based in Switzerland. Their goal was to create the most neutral and perfect font. These men were nothing short of scientists, meticulously hand crafting each glyph (when there weren’t computers around) point by point. Helvetica translates to “Swiss” and like other Swiss crafted items, this font is immaculately designed and of the utmost quality.

Helvetica blew up in the ‘60s and ‘70s as it became the favorite font of designers, for its modern, clean, and commercial appeal. Helvetica’s legacy is evidenced everywhere and can be seen in the logos of Target, Panasonic, Energizer, American Apparel, Crate & Barrel, Post-It, BMW, and countless others. Since its creation, more weights and variations have been added to the Helvetica set (Light, Compressed, Black, Rounded, Narrow, Neue), making it even more versatile and complete. To learn more about Helvetica, check out this movie that documents the history and making of this notable font.

Arial was created in 1982 by Robin Nicholas and Patricia Saunders of Monotype (a type foundry). Arial has a dubious past and does look rather similar to Helvetica (some of the glyphs are practically identical). It even includes similar variants (Unicode, Black, Narrow, Rounded, Light). Following in the footsteps of Helvetica, Arial was also designed to be a universally pleasing font. However, someone seemed to have forgotten about the saying, “If it’s not broken, don’t fix it.” Arial wanted to take the place of Helvetica, but fell short in its inferior design. This isn’t to knock the creators of Arial, but it’s just difficult to improve upon the immaculate design and care that went into Helvetica.

Despite this, you’ve probably noticed that Arial seems to be more commonplace than Helvetica. This is due to Arial being included in the Microsoft Windows font package beginning in 1992. Because Microsoft Windows exploded in popularity, so did Arial. Arial is much more available and accessible. Windows still doesn’t come with Helvetica (whereas Mac OS does) and if a windows user wanted it, they’d have to go out of their way to purchase it. So Arial isn’t more popularly used because it’s better, but because it’s more affordable. You also don’t see Arial in the commercial arena like you do Helvetica.

Glyph’s Anatomy
Before we begin analyzing anything, we first need to learn a little about the anatomy of a glyph, so that we know what to specifically look for.

I’m not going to analyze every glyph side by side. Instead, I will just go through the ones that stray furthest from one another, that really set the two fonts apart. Arial is in the blue while Helvetica is in the red, they overlap to make violet.

I always think that the lowercase a is one of the easiest giveaways between Arial and Helvetica. First notice that Helvetica has a tail at the finial, firmly anchoring the letter and completing the flow of the stem, whereas Arial is cut off at the baseline, making the a appear less stable. The terminal of Helvetica ends at a horizontal, which helps complete the letter. Arial on the other hand looks a bit clumsier, with the terminal ending at an arbitrary angle. Also notice how the bowl meets the stem with a pleasing curve on Helvetica, making the letter look fuller. This same joint on Arial looks disjunct.

Notice in Helvetica how the terminals and finials of f, r, and t all end in perpendicular horizontal and vertical lines, whereas they’re all angled in Arial. But what’s even more jarring, is that the Arial terminals of these three letters all end with different angles. Where’s the rhyme and reason? Furthermore, notice in Helvetica how the terminal of the f and the finial of the t end at the same vertical line as their respective crossbars. In contrast, the f terminal and t finial both overshoot the crossbar in Arial. Helvetica demonstrates in these three letters exactly how thoughtfully designed it is. It’s uniform, tight, and structurally sound by adhering to a guide of verticals and horizontals. The lack of uniformity in Arial makes it seem less succinct when the font is composed as a whole.

You can observe that Helvetica continues to adhere to the same perpendicular grid principle in these rounded capital letters as it did with the lowercase letters. The terminals in Helvetica all end at a horizontal, whereas Arial continues with its arbitrary choice in angles. You can see that Arial and Helvetica just have slightly different bowl shapes, but they appear rounder and fuller in Helvetica.

I find the difference between Gs to be especially interesting. It seems as though Helvetica broke their own rules by shaving off the finial of the G at an interesting angle. However, there was reason for this and it was done for the sake of fine design. Imagine if the finial was continued on the vertical line. The joint where the bowl, leg, and finial meet would be very heavy. The concentration of points would be an eyesore and the G would attract too much attention. I also think the addition of the finial was a smart decision, because like the a, it helps ground the letter. The Arial G seems less stable and the bowl feels a bit incomplete.

The tails of the Qs are remarkably different. Arial decided to go with an embellished tail. I find that it brings additional mess to the font as a collection, adding new lines and new angles. Helvetica sticks to the rule of perpendiculars even in the tail of their Q. The Q is a strange glyph overall, but in applying the same principles to it as their other glyphs, Helvetica successfully integrates it with the other glyphs, making the font as a whole more neutral.

The Rs are another easy indicator between the two fonts. With the leg sticking so far out, the letter seems to take up more space than necessary and creates an odd counter. This space can look awkward in text. Moreover, the joint where the leg meets the bowl recedes too far in, making more awkward negative space. The glyph seems off kilter. Helvetica designed the R masterfully. The counters are stable and balanced, and almost parallel one another. As with the a and G, Helvetica effectively utilizes the finial in the R to stabilize the glyph.

Arial continues adding arbitrary angles in its numerals. The ear of the 1 looks unanchored to the stem, as if it’s about to flit away. By making the ear meet the stem at a 90 degree angle, Helvetica’s 1 seems solid. The Helvetica 3 looks more complete and settled than the Arial 3 again because the strokes are completed at flat, perpendicular lines. The Arial 3 looks a bit springy because of its angled terminals. I just want to press the top down a little to straighten the glyph out a bit.

There’s no question that Helvetica is well designed. Its prolific use in the commercial sphere alone can speak to this. Arial did a pretty good job in mimicking it, as many people can barely distinguish between the two. It’s even surpassed Helvetica in common use by virtue of being connected to Windows. However, there really isn’t a good substitute for Helvetica because it’s absolutely neutral. There are too many quirks in Arial that when composed together in text, result in a clumsier image. Try it: compare these two paragraphs written in Arial and Helvetica side by side. Take in the block of text as a whole. Do they look different to you? Does one look better and more grounded than the other? It’s these small, intricate differences in the terminals, finials, strokes, and bowls that when combined, result in bigger differences and make one font superior and better designed than another. 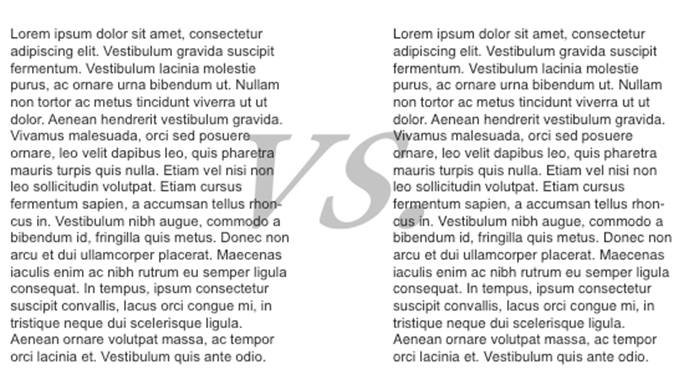