Wireframing tools make creating a website or application fundamentally easier, by allowing designers or design team purely focus on functions and user interactivity with conceptual prototypes in hand. Generally there are more prototyping tools than ever, each offering different levels of functions. For another thing, making a right choice amongst them can be daunting especially when you are new to this space.

That’s where this comparison comes in handy. As wireframing/prototyping software competitive landscape keeps changing rather rapidly, so we’ve covered both big and new names you might already know before, including Axure, Mockplus as well as Balsamiq. Before diving deeper into the detailed features, let’s have a short intro to three of the most popular website wireframe tools one by one.

Out of hundred of thousand of wireframing tools, Axure has emerged as real stand out for a good duration of time. With robust design capabilities and interaction-centric workspace, this software continues to expand its market share in an undeniable manner. The newest RP 7.0v comprises of more functions with full compatibility of both Mac OS X and Windows 7/8/XP. Its price starts from $289 to $589, which is a heavy loan for most users. 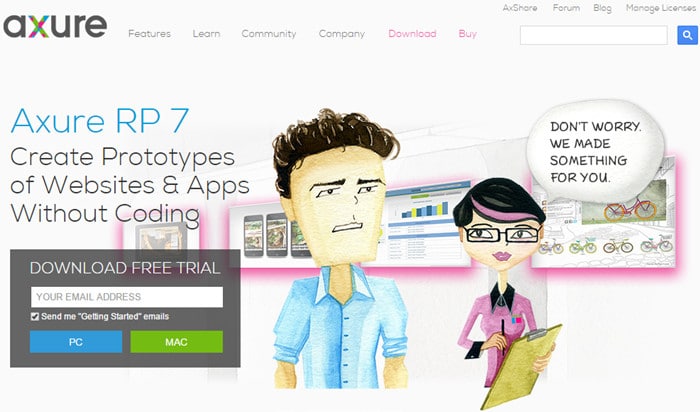 Supported by a group of like-minded developers from Jongde Software LLC., Mockplus gradually becomes an uprising star in the fierce competition of wireframing. It does give user experience the highest priority and start with a mission of making the complex simple. Those simple yet powerful functions make it an undisputed king of UX design in mainland China, and their efforts paid off with more and more happy customers coming from the international community. 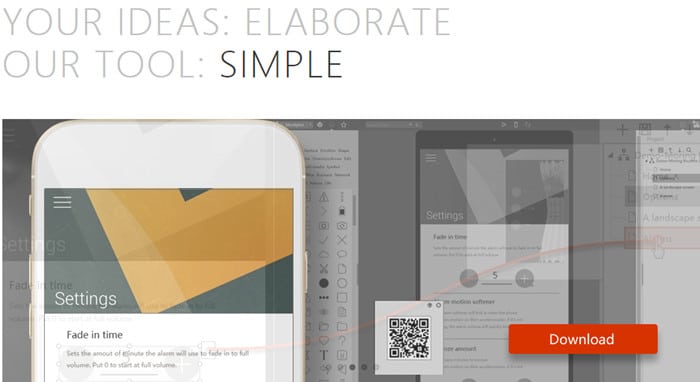 Also as the industry standard in interactive wireframe software, Balsamiq comes in plugin, web app and desktop forms as well. One singular goal of this wireframing tool is to keep the mock-ups internationally rough and low fidelity, encouraging as much feedback and sharing as possible. It’s now available for three different versions, including Desktop, Google Drive and Cloud. No free plan released yet.

There are definite pluses and minuses for each of them, and the following parts will focus on several top concerned aspects when evaluating different software. To learn different comparison charts on prototyping applications, just take a tour on this wiki page

Axure & Mockplus & Balsamiq – Which Is the Best Choice on Earth?

This can be the most important part when it comes down to a great mockup tool, and prototype generator and wireframe interactivity are the central features. Taking those three tools for instance,

To tip it off, the standard libraries of Axure shapes may be huge, but most of them are still primitive, usually requesting the importation of shapes or extensive assets editing to fit the current project. Often times, those templates and libraries are not free offers and require extra money for usage purpose. Beware that, there are no multiple choices for font selection.

Another highlight is the extensive markup components and icons – more than 400 icons plus 200 pre-designed components. The “TopBar+List+BottomBar” components make it pretty easy to create an App page, no USB cable or remote publishing required there. Its collaboration and productivity features let you output interactive wireframes as visual-friendly images or HTML prototypes.

Some features required by experienced interaction designers to execute and manage the current projects work both efficiently and rapidly, but the absence of the ability to Pan and Zoom will obviously slow work down and meantime make it not an ideal choice for large-sized projects. The Notepad background image will stretch vertically each time when you increase the height of your mockup, and that memory usage shoots up over time is still an unresolved issue.

Speaking of cloud-based collaboration offering, we cannot go past the share.axure.com. It delivers an effective way to share your prototypes with shareholders and project team members. It’s at your choice to password-protect the existing prototype or make a backup of the original Axure.rp file in another location. It’s worth mentioning that the past versions only support “Export Axure to Local/Upload All Files via FTP”, which is a cumbersome and irritating process for most regular users.

Balsamiq also comes standard with shared controls – Mockups To Go – a user-contributed collection of user interface components and design patterns. However, when it comes to efficiency and simplicity, Mockplus is the clear winner as it permits you to export and share prototypes on mobile devices via simple export options, without the need for remote publishing.

Axure may lose the fight at this point. To be specific, Axure contains a specification document generator to export all the wireframe pages and widget notes of every design element into another document of Microsoft Word. But here comes the problem. The layout of the document is so dependent on the .dot template offered by Axure and it’s not easy to further customize this MS Word template. Also, printing with Axure rarely works correctly, but Mockplus is way ahead in view of page size, orientation, margin options and much more.

No matter you’re using Axure or Balsamiq, it’s better to plan your prototype carefully, with all masters, pages as well as design elements rightly labeled. Failing to complete this procedure, with some ugliest annotated wireframe will bring very bad result. In this sense, the automatic backup feature of Mockplus can be a life-saver for any unexpected consequences or disasters.

In summary, every coin has two sides and those aforementioned wireframing tools, including Axure, Mockplus and Balsamiq, have their strengths and weaknesses. However, Mockplus is definitely the best choice for those wishing powerful interactive, sharing as well as documentation features without technical background.

Furthermore, its hand-drawn features, user-oriented interface and comprehensive tutorials also add a touch of professionalism. Above all, it’s available for free download via this link, and the newest 2.1 version is coming soon with twice the power of the original. 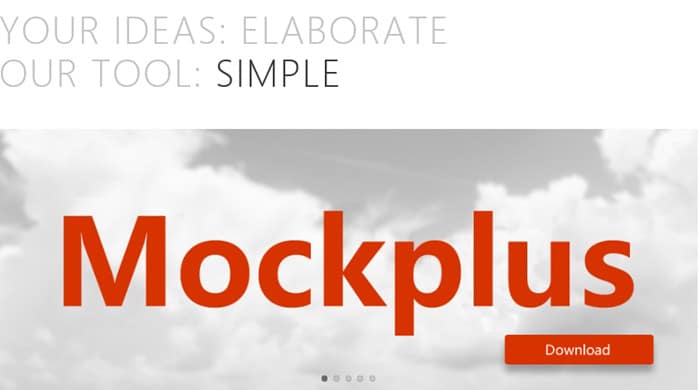 Graphic design magazines have helped a lot of aspiring designers through the years. And since technology has brought in the convenience of online media and communication, magazines today have their own share of accessibility through the Internet. Today a lot of them have hosted their own websites endorsing their printed publication for everyone to read….

LG’s new 34 inch, 21:9 UltraWide Monitor is the ideal canvas for designers in every field. No more setting up two monitors side by side— the 34 inch screen size is ample enough for any artist’s needs. The remarkable size of this monitor plus its 3440 x 1440 QHD resolution creates a deeply engaging user…

Important points in sound design Sounds surround us everywhere: everyday business, film, television or radio broadcasting. Sound is one of the most important parts of our perception of the environment, our picture of the world. Sound is an integral part of any movie, promotional video, presentation or clip. Dialogues, specially selected music background, sound effects,… 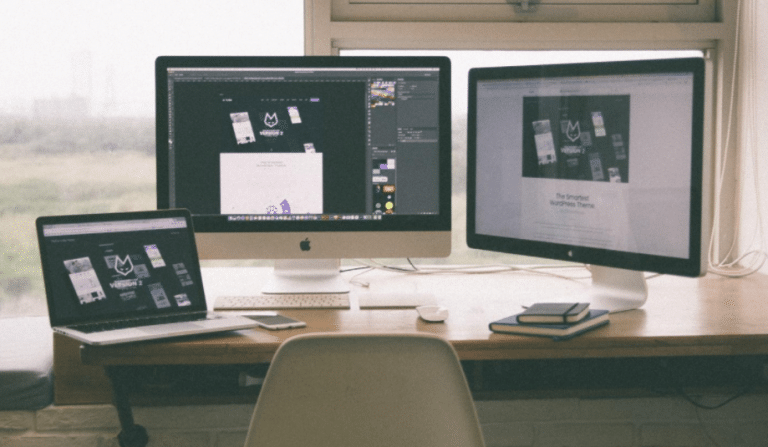 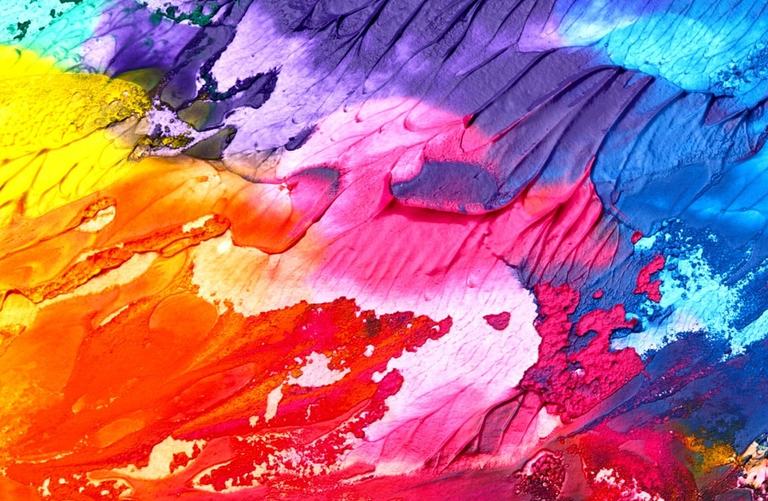 As a graphic designer, it can be difficult to always have your creativity on demand. Add to this a slew of projects with impossible deadlines, demanding clients, and a life to live and you’ve got a hard pot to fill. Staying inspired with new ideas for graphics is possible. One of the best places to…

UX, or user experience, is moving to the forefront of considerations for modern web designers. A great user experience can make or break your company’s app or website. In fact, it can mean the difference between a visitor and a customer. In today’s digital world, businesses must ensure their apps and websites are easy to…