No doubt branding is crucial for every business nonstop growth. More and more giant companies are focusing on rebranding to catch up new trends. Rebranding not only enhance sales graph but also increases brand loyalty.

And this is why entrepreneurs hire professionals in order to constantly improve their brand face. Unfortunately despite having a professional marketing team, companies fail to build a brand image that works to capture the attention. Here is a list of list of 12 worst examples of rebranding that can impact any business growth.

We all know that Gap is a popular garments manufacturer and seller. Still it is using the same logo because of their loyal customer’s choice. You will be surprised to know that GAP was forced to replace their new logo a few days after its public launch. The response to their new logo was so bad on Facebook and twitter that they had to make an immediate U-turn to the previous version in just one week. According to a report more than 2000 Facebook users and 5000 twitter users have criticized the step of Gaps rebranding.

Master card is a global use reliable payment partner that issues a credit card. After 20 years when Master Card changes their logo design people react too badly that they are forced to use old the design again. This is because the new logo design fails to capture the attention of the public as well as designers.

MasterCard holders use social media platforms to record their negative views on the new logo design. Although many feedbacks were positive, but MasterCard chooses the majority decision and reused their old logo identity.

Best buy is a big retailer chain which offers reasonable price stuff. This big retailer firm launches their new logo at the opening of a new outlet in the mall of America to check the consumer response. Sadly the new logo strategy doesn’t work well to capture the attention of the best buy customers.

Majority of people give negative view when coke redesigned their tin and bottles packaging with a new logo. Additionally, many people react so badly that they said they didn’t want to have the New Coke. For years people were admiring the classic design of coke and a rapid change in its deign disappointed them.

However the company withdraws the idea of rebranding and is still using its classic logo design to entertain their consumers.

Yahoo upgraded its logo with the only change in font style and shade of purple in 2013. Many people are disappointed with the launch of the new Yahoo  logo design and called it more traditional and an adult design. The new logo design fails to impress users, but it brings more business to the company and people start talking about yahoo again.

It is true to say that Pepsi Corporation has modified its logo many times but its red, blue white circle still remained the same. In 2009 Pepsi launches a new design of their logo which was thumbed down by a large audience. That’s because People feel the new design is too simple and lacks the energy that youngster’s desire. 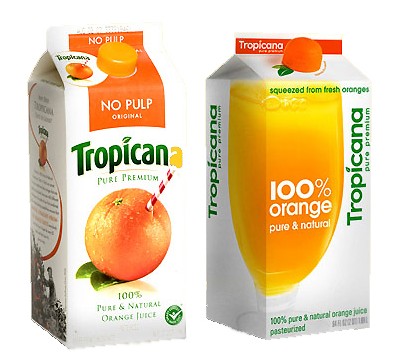 The Pepsi corporations famous drink Tropicana came into news when it change its brand identity in 2009. The new design was rejected and criticized by the majority of consumers and forced the designers to reuse the old version of packaging.

When the new packaging launched competitors take advantage of the crisis as Tropicana lost a great proportion of it sales. From a market survey statistic Pepsi lost more than 50 million in the rebranding phase of Tropicana.

In 2012 Olympics have launched a new logo in London which fails to please its audience. According to ABC news the logo which has cost around $800000 was criticized by most as it doesn’t represent London or  the game. And the surprising fact is that in a public poll by BBC 80%  of people dislike the new logo design and judged it childish.

AOL launched six new versions of their brand identity at once in 2009. It includes a golden fish, pink brain, rock star hand, blue circle, green sketch and a colorful tree. The wide range of logo versions confuses the audience and provided a negative impression. Many people find unmatched because new logo characters doesn’t suit with their original business which is “internet access.”

It is another worst example of rebranding that makes NBC colorless. Actually in the previous version of the logo there is a colorful logo in the center while the new version is a large purple box with the title only. People dislike the new amendment because colorful element is all they notice in the NBC logo. The new logo not only costs too much but also declines the brand popularity around the world.

Kraft food is a well known brand and it’s a fact that people remember it because of its brand identity. A few years ago, craft has modified its simple logo by adding text and an explosion of colors. It was a disastrous branding step for Kraft foods that forces them to turn back to old version of their logo. This is because people don’t appreciate the way Kraft foods adds an unwanted color explosion and tag line.

In the end, it could be said now that the information provided in his post is best for marketers that want to bring change in their brand identity.

Anna Marsh is the writer of this post. She is a Design Expert, Blogger, and an Online Marketer. Her blogs reveal the various facts about students assignment helps, tips, tricks, and techniques about online marketing industry. In her free time, she likes to spend time with her family and pets. You can interact her on Twitter, Facebook, and Google Plus.

We all love portfolios and being designers all of us do have one. Seeing the work of other designers usually inspire us to create things and strive to become better. In this case I have featured 20 Extraordinary Designer Portfolios you have to see. Portfolios can be really inspirational at times and especially if a…

Check out really impressive Flash sites. Note: each site is created to promote a certain movie. However, the most important is how well done these 40 Flash sites are.

Today we would like to present to you another amazing giveaway. PixelKit and Designrfix have teamed up to offer you the chance of winning a professional UI kit library which includes UI kits, icon sets and graphic elements just to name a few. We are giving away one of three membership accounts to lucky designrfix.com readers.

We are making a “Who is online” widget with PHP, MySQL & jQuery. It will display the number of visitors, currently viewing your site, and a list of countries they are from in a slide out panel.

Here is a complete package of AJAX Tutorials Web Developer, Ajax is a short form Synchronous JavaScript and XML is a set of methods that are used by many modern and popular web sites

In today’s inspiration post, we bring you a collection of 40 Examples of Minimalist Web Designs.Notice the attention to detail in proportions, mathematically calculated typographic spacing and size, and conservation of colors.